“temporal.Divergence” is an ambient-electronic sci-fi inspired “mindscape” – ambient pads and notes wash across the soundscape, computers and machines go about their covert operations, and occasional beats, drums and light distortion increase the tension as the listener is propelled through time, adrift in open space, or on some massive craft as it rips through invisible portals on a journey to past or future.

“…of course it’s safe. All case files are public knowledge. Forward, back, between timelines – it’s all been tested. Every jump has been a success.”

Peter Edwards, an ambient/dark ambient experimental soundsculptor based in Albuquerque, New Mexico, recording as Peter Edwards Ambient, landed on my radar screens only during the summer of 2018, shortly before releasing his third full-length CD album “temporal.Divergence” as the next chapter of dark ambient pentalogy. Available in digital formats since August 18th, 2018, stunningly designed 6-panel digipak was released a few weeks later through Peter’s own Caffeinated Monk Production label, the home of his previous two impressive CDs, “suspended.Lucidity” (May 2015) and “binary.Abstractions” (July 2017). To me, this was a huge discovery indeed!!!
Perfectly described as “ambient music for time travellers”, this thrillingly immersing odyssey is ignited by shorter “Prelude”, which immediately sets the spatially tenebrous atmosphere. 6-plus minutes long title track “temporal.Divergence” is fuelled by bouncing cyber-tech pulses juxtaposed by industrial outbursts, razor-sharp beats and heavenly hissing solitariness. A truly jaw-dropping introduction to distinguishably transporting realms by Peter Edwards!!! “quantum.Flux”, at 7:33 the longest ride on the album, amalgamates massive drone reverberations with transcendentally helixing meridians and ear-tickling glimmers. Another aural spectacle! “revolution.Induction” masterfully merges hypogeally enigmatic stratums with perpetually ascending galvanic beacons and eerily rumbling fractals. Sonorously mindblowing! “gravField.Theory” dives into gargantuan depths, which are persistently illuminated by eternally galloping oscillations and piercing sci-fi narrations by Randy Savage, who also contributed voice on the opening “Prelude”. “dark.Matter” sails through unfathomably breathtaking realms, where intangibly thundering, yet tenaciously ambiguous magnitudes commingle with inconspicuously emanating desolations and transmogrifying resonant vertexes. Beyond the gates listening splendor continues also through “causal.Continuum”, when mesmerizingly barren heavy-duty beats collide with remotely roaring perplexes. “tempo.Kinetix”, as indicated by its title, shifts into vigorously driven scenario, perforated here and there by outbursting strikes, while immensely panoptic layers are guarding above. “time.Machine” merges abysmally engulfing murmurs with translucently flickering fragments and clandestinely arising oracular ephemerons. On “The Quantum Mechanics Of Time Travel Through Post-Selected Teleportation” mysteriously nuanced drones are reinforced by the narrations of a “quantum mechanic” Seth Lloyd of the Massachusetts Institute of Technology. Short epilogue “Gate.22180818” closes the album, but there is hidden also a 4-minute untitled bonus track, which remains in fascinatingly enveloping monochromatic cosmic zones, percolated by gossamery evanescent traceries and ear-bending numeration.
Peter Edwards Ambient is a truly staggering exploration, which shifts each listener into magnificently adventurous portals, uniquely sophisticated, meticulously crafted and intriguingly rewarding. 64-minute “temporal.Divergence” album is an all-inclusive magnum opus, both sonic and visual (design by Savage Internet Media), with deeply focused content and superb presentation. A vast display of artistic brilliance, which is, unfortunately, still hidden to a bigger audience within the ambient drone soundscaping. On the science note, this must be some kind of a call I received only several months after experiencing the Karl G. Jansky Very Large Array, a Radio Astronomy Observatory located on the Plains of San Agustin in central New Mexico. I really wish I knew this gifted sound designer when passing by Albuquerque. Grab your headphones and immerse yourself into this exquisitely monumental futuristic journeying!!!
Richard Gürtler (Oct 20, 2019, Bratislava, Slovakia)

“temporal.Divergence” is the next release in the dark ambient pentalogy from sound designer Peter Edwards Ambient. Building on his previous works, Peter weaves a deeper web of mysterious, brooding ambient that draws the listener into its evolving story of time travel and the future of human evolution.

The album begins with a warning that manipulating time and space has unintended consequences for humanity. The identity of this voice is unknown, but seems to be someone we’ve met previously on the 2017 soundscape release “binary.Abstractions”.

As always, field recordings are used as the base of Peter’s creation. He enjoys twisting and manipulating everyday sounds to create a feeling of wide open, empty and potentially dangerous alien spaces through which the listener can wander and get lost… or worse.

“temporal.Divergence” has an almost sci-fi quality to it – ambient pads and notes wash across the soundscape, computers and machines go about their covert operations, and occasional beats, drums and light distortion increase the tension as the listener is propelled through time, adrift in open space, or on some massive craft as it rips through invisible portals on a journey to past or future.

One of the secret bonus tracks available on the main website (we’ll let you figure out how to get to it) actually sounds like it could be the theme for a sci-fi TV series, and will supposedly be featured on next year’s release in final form.

“temporal.Divergence” is quite familiar and yet also a nice evolutionary progression from Peter’s previous albums, utilizing a wider variety of instrumentation and what seems like deeper sound design. If you’re a fan of experimental ambient music, science fiction, and immersive sound experiences, be sure to give this one a try!

fringe theory suggests alternate forms of temporal manipulation, most involving the required harnessing of darkmatter, a technique mastered early in the 23rd century.

electronic implants allow us to control the gates through which we travel. jumping is impossible without these biohacks, as many outliers have unwittingly discovered. 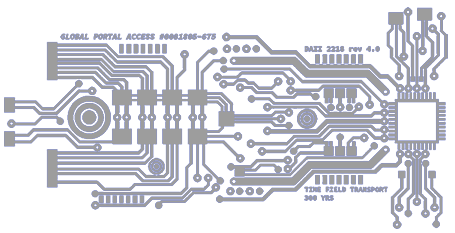 Solutions for the 23rd century and beyond.

automating temporal manipulation has promising effects for the future: higher accuracy and the ability to adjust on-the-fly for unforeseen variables, minimal downtime and increased success rates.

the control systems we have in place will insure against rogue AI activity. the Core is learning at an exponential rate and will soon be able to oversee all aspects of the temporal manipulation project. 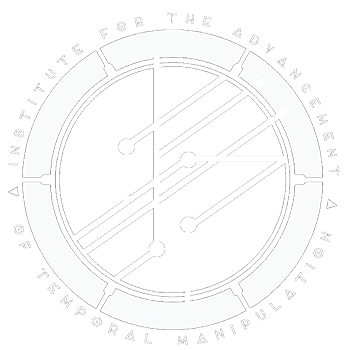 “temporal.Divergence” is the next release in the dark ambient pentalogy which began in 2015 with suspended.Lucidity. This release builds on my previous works, and I’ve attempted to broaden the instrumental palette, weaving a deeper web of mysterious, brooding ambient that will hopefully draw the listener into its evolving story of time travel and the future of human evolution.

Ever since I was a young man in my old timeline, I’ve been fascinated by time travel and the implications it has for individuals and society as a whole.

My discoveries, however, have changed my opinion of its worth. There are factions that would lead you to believe that it’s safe, that it has only the highest potential for creating a truly glorious utopia on earth.

These claims are fabricated to conceal the real truths here: we are being guided to embrace the new jump-enabled bio-tech for reasons I’ve discovered are more ominous and far-reaching than we’ve been led to believe.

Listen closely. Keep your eyes and EARS open. The reality uncovered in binary.Abstractions has come to pass, but not in THIS timeline. There’s still a chance to avoid the enslavement of humanity. 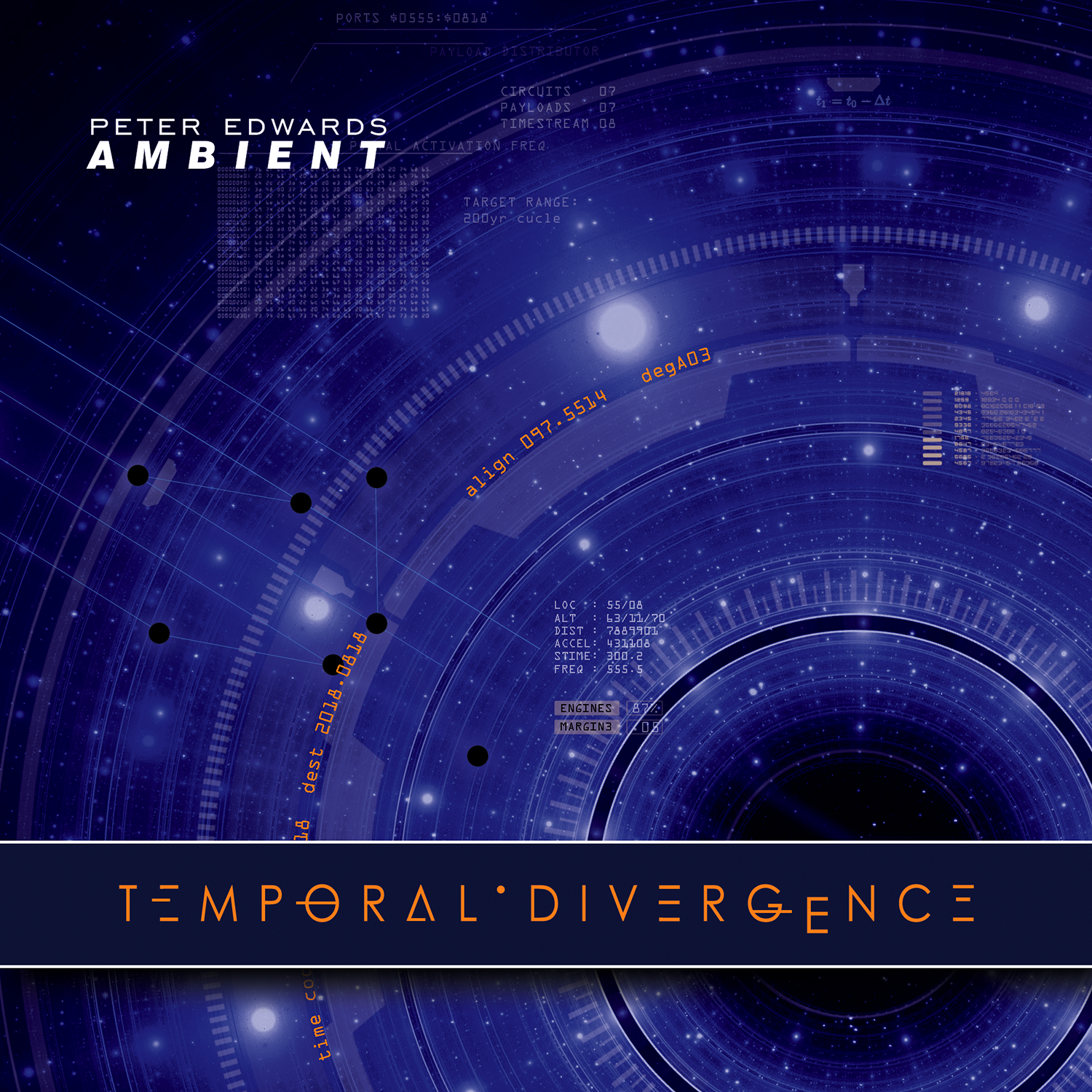